Army Rage is a free to play MMOFPS game based entirely on WWII. With its dynamic game play and authentic weapons, this game recreates the atmosphere of the largest military conflict in human history.
The Assault gift package will help you experience the best options provided by the Assault class in Army Rage. Don’t miss your chance to grab and use this promo code in-game, the weapons and special equipment you’ll receive will save you weeks of play – all completely free!
Promo pack contains:

A semi-automatic rifle with an 8 rounds magazine suitable for any range. Click the right mouse button to zoom in.
The M1 Garand uses .30-60 Springfield rifle cartridge, and was heavily used by the U.S. forces in the World War II. It was the first semi-automatic rifle to be commonly issued to the infantry of any nation, and called “the greatest battle implementation ever devised” by General George S. Patton.

High damage and accuracy with a strong kickback force.
The FG42 (Fallschirmjagergewehr 42) was a selective fire battle rifle produced in Nazi Germany during World War II. The weapon was developed specifically for the use of airborne infantry in 1942 and was issued in very limited numbers until the end of the War. The FG42 uses 7.92x57mm Mauser rifle cartridge. This full-size rifle cartridge provides a deadly kill power but also makes the gun nearly impossible to handle because of its strong kickback force.

Remotely controlled explosives. Press the left mouse button to place it and the right mouse button to switch to detonator. Make sure you're away from the bomb when detonating because even a medic won't be able to help you from killing yourself.

This card gives you 50% more experience gained after each game you play. The card will expire after 14 days.

5000 Coins
Coins are the game currency you win by playing. The better you are, the more coins you receive after each match. You can buy weapons and special equipment with this currency.

How to activate your promo code?

Step 2. Add your email in the field below the image of the promo and check your email account and follow the instructions.

Step 3. Please visit Army Range and Register an account and activate it with the link sent to your email after registration.

Step 5. Login the game and create a character name upon your first login.

Step 6. Return to the homepage and login there, click on “Account” link at the top of the page and enter your promo code at the bottom box: 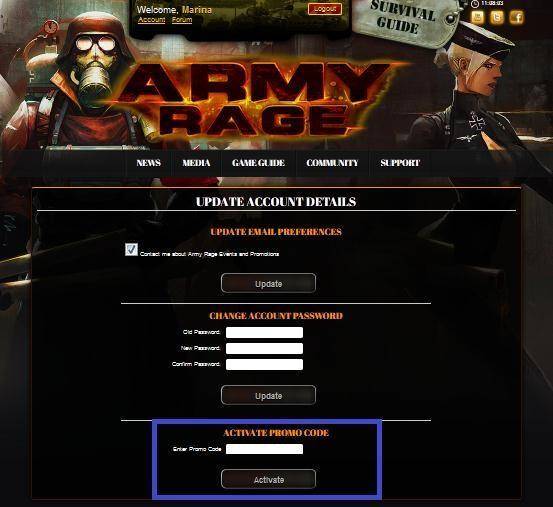 Step 7. The next time you enter Army Rage game, you will find your gifts in your Armory: 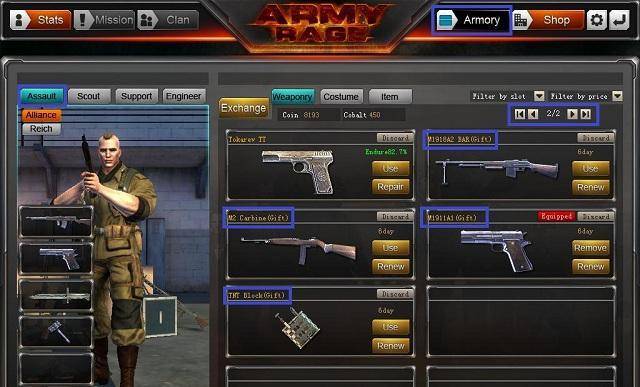 Once you find the items, the only thing that’s left to do is press “Use” and you’re good to go!
Enjoy your game!


About this game:
Army Rage includes exciting content which hasn’t been experienced much in other FPS games, such as: use of some authentic WWII powerful weapons (i.e. rocket-launcher in longer-distance battles, flamethrower in close combats); artillery support; constructing a heavy machine gun and even driving tanks freely on the battlefield. Players will encounter the heaviest firepower ever seen in games of this class.
The game achieves an impressive team work as the players have the opportunity to choose one of the two rival sides - Allies and Axis, team up in 6 separate teams of 4 people each and set their class - Assault (equips powerful grenades and assault rifles), Scout (skilled sniper), Support (equips anti-tank rifles and flamethrowers, uses machine guns and drops medical kits to revive other players) and Engineer (uses submachine guns and rocket launchers, has the unique ability to build stationery heavy machine guns).
There could be up to 24 players competing with each other or united in teams in one room. The players can create as many rooms as they like with different maps, missions and game modes in order to achieve a more dynamic game play.